In order for open science to happen, it is important to get out of your own bubble and connect to stakeholders with different interests in science, policy, research workflows and infrastructures. That is why LIBER hosted an Open Science Cafe at the Open Science Fair in Athens last September. The initiative was organised together with six European projects, and provided participants with the opportunity to talk about open science related topics in an informal setting.

How does it work, an Open Science Cafe?

In short, the organised Open Science Cafes were roundtable conversations ignited by statements on a set of cards. Participants could pick a card with a statement related to open science from a pile, talk about this for some time, and then move on to the next card.  After half an hour the participants would move on to a new table and a new group of people. A moderator and notetaker kept track of the conversation and made sure that all voices were heard.

Notes were taken in two ways: most conversations on a specific statement or topic led to a mindmap. In case someone would come up with a brilliant remark that was just spot on, it could also be written down on a ‘brilliant quotes and ideas’ card.

Want to organise an open science cafe yourself? These things will help you get started:

Around 30 people joined the conversations in Athens, including researchers, managers, data storage specialists and librarians. The Open Science Cafe was organized by LIBER, OpenMinTeD, FOSTER Plus, EU-DAT, FutureTDM, EOSCPilot, LEARN and OpenAIRE. The following people were involved as chairs, note takers and for media support: 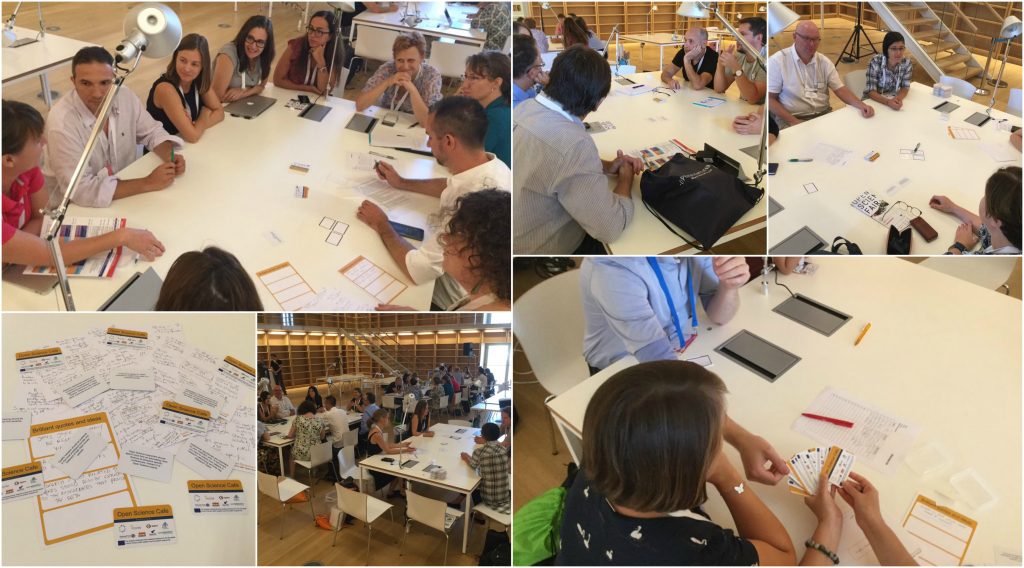 Results from the Open Science Fair

The topics that were discussed most and resulted in most mindmaps were Open Access, Open Data and Text and Data Mining (TDM). However, conversations on other topics also led to some interesting insights. Below is a summary of the opinions and thoughts, divided into different categories.

Most conversations on TDM evolved around the stakeholders, skills and education, legal and data & privacy. In general the participants did think that TDM is important for a lot of different stakeholders, even though there is still a lack of skills and no stable copyright law. There are also open ends when it comes to privacy aspects. Some more detail:

The statement “It should be easier for citizen scientists to publish their work in a scientific journal.” did raise some eyebrows. Even though in the TDM conversations some defined research “by the method rather than the affiliation.”, some felt that this did not extend to scientific publishing.

In general, the participants were in favour of open peer review and thought it would improve the quality of research and accountability.

Data management is a challenge, in part because of practices, skills and time, in part because of the amount of different stakeholders involved and confusion about ownership of data. Where to start? The discussions seem to indicate on both levels: policy and practice, and top down as well as bottom up.

A large part of the open access conversation focused on incentives for researchers to publish open access. Incentives seem to lay in a change in the whole research evaluation system, and in money as  “a researcher follows the money.”

Although some people didn’t see the value of sharing lab notebooks, others thought it could avoid repeating failed experiments, provided it could be mined and had the right (meta)data.

Some other topics were discussed that did not fit any of the topics above. There were no strong conclusions, but this gives you an impression of what was said:

Some interesting remarks were made during the conversations, and they were collected on the ‘brilliant quotes and ideas cards’. The favourite quote of the organisers was turned into a visual for dissemination purposes: 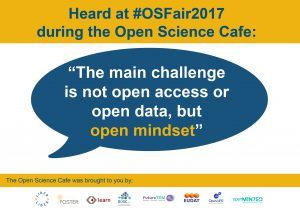