Research libraries are closely watching the European Commission’s current work to reform copyright legislation because libraries and their users will be directly impacted by any changes to the law. Particularly interesting for libraries is a proposed new exception for Text and Data Mining (TDM) but numerous issues related to this potential exception still need to be addressed to ensure usability.

That’s why LIBER, together with fellow organisations such as CESAER, EUA, LERU, Science Europe and SPARC Europe, is currently working around the clock to raise awareness among EU policy makers about how a copyright exception on Text and Data Mining for research organisations must look, if it is to work for research libraries and their users. You can help too! In this article, we outline what changes are needed and what you can do to make sure our message is heard.

Our changes relate to a proposed new exception for TDM, which was outlined in the Proposed Directive on Copyright for the Digital Single Market. Research libraries were not included in the scope of the original proposal, although fortunately this now seems to be supported by the majority in both the Council and the European Parliament – the two institutions who are currently reviewing the proposal and who have equal power to decide over it. 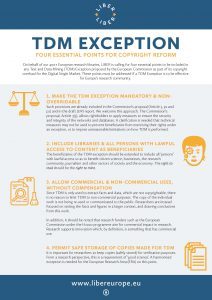 Our poster clearly explains what libraries need from a TDM Exception. Download your copy.

In addition to ensuring research libraries are included in any TDM exception, LIBER is asking for four key improvements (as outlined below, and in this poster):

In the original Proposed Directive on Copyright for the Digital Single Market, issued by the Commission in September 2016, research libraries were not included in the scope of a new exception for TDM. Fortunately, this now seems to be supported by the majority in both the Council and the European Parliament – the two institutions who are currently reviewing the proposal and have equal power to decide.

A number of relevant committees in the European Parliament have so far adopted opinions on the issue. It is now up to the lead committee of legal affairs (JURI) to decide what they think a renewed copyright legislation should look like. A draft report was issued in the spring and had almost 1,000 amendments. On TDM alone there were about 100 amendments.

A vote on these amendments might take place in the second part of November.

LIBER together with fellow organisations analysed all the proposed amendments related to TDM and provided a report to the relevant members of the European Parliament before the summer. Most recently LIBER signed an open letter focused on Open Access and another open letter on TDM, both of which were addressed to JURI.

There are many stakeholders with strong interests in the matter that are lobbying parliamentarians and asking for their support. Your voice counts too!

LIBER has also provided similar input to the Council working group members and to national ministries for research, innovation and competitiveness. Reliable sources suggest that research libraries are included in the scope of beneficiaries but there is strong reluctance to broadening it much further.

How Can Your Research Library Help?

Thank you for your support!