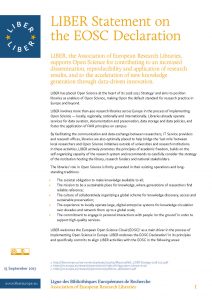 LIBER has endorsed the principles of the European Open Science Cloud (EOSC) Declaration on Open Science and believes that its 400+ research library members across Europe have a strong role to play in enabling Open Science.

Download our full statement on the EOSC Declaration (PDF), or read it below.

LIBER, the Association of European Research Libraries, supports Open Science for contributing to an increased dissemination, reproducibility and application of research results, and to the acceleration of new knowledge generation through data-driven innovation.

LIBER has placed Open Science at the heart of its 2018-2022 Strategy and aims to position libraries as enablers of Open Science, making Open the default standard for research practice in Europe and beyond.

By facilitating the communication and data exchange between researchers, IT Service providers and research offices, libraries are also optimally placed to help bridge the ‘last mile’ between local researchers and Open Science initiatives outside of universities and research institutions.

In these activities, LIBER actively promotes the principles of academic freedom, builds on the self-organizing capacity of the research system and recommends to carefully consider the strategy of the institution hosting the library, research funders and national stakeholders.

The libraries’ role in Open Science is firmly grounded in their existing operations and longstanding traditions:

LIBER welcomes the European Open Science Cloud (EOSC) as a main driver in the process of implementing Open Science in Europe. LIBER endorses the EOSC Declaration in its principles and specifically commits to align LIBER activities with the EOSC in the following areas:

In conclusion, LIBER is committed to actively participate in the further development of the EOSC, which will critically depend on the specific implications each individual point mentioned in the EOSC declaration will have on research libraries in general and individually.

In its role as a representative of more than 400 European research libraries from over 40 countries, LIBER is prepared to carry specific implementation plans to its constituent libraries
and to help develop an efficient and inclusive European system for Open Science. LIBER supports inclusiveness and acknowledges diversity in this system and recommends considering the large as well as the small activities that contribute excellent research, as exemplified in the document ‘Addressing the Gaps: Recommendations for Supporting the Long Tail of Research Data’.