Passing The Torch: Thanks to Dr Ann Matheson and Welcome Mr John MacColl as Secretary-General 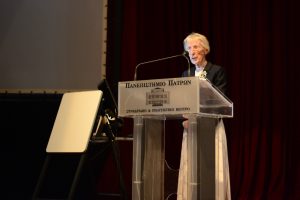 At LIBER’s 2017 Annual Conference in Patras, we thanked Dr Ann Matheson for her outstanding dedication and work as Secretary-General and welcomed Mr John MacColl — University Librarian and Director of Library Services at the University of St Andrews — as our new Secretary-General.

It was no small task to thank Dr Ann Matheson for her work as LIBER’s Secretary-General for much of the last quarter-century: from 1994-2000 and from 2007-2017. Dr Matheson received the LIBER Honorary status in 2001 for her remarkable contribution to LIBER.

“Loyalty, understanding, and warm friendship have characterised Ann Matheson’s important contributions to the many organisations and individuals she has worked with through a long reach of years. Her sound judgement, when asked to prioritise between different solutions of intricate problems, is admirable. She has always been prepared to give a most useful helping hand,” said LIBER President Kristiina Hormia-Poutanen in a speech of thanks for Dr Matheson.

Dr Matheson will remain involved with LIBER as a special adviser to the Executive Board.

As LIBER’s new Secretary-General, Mr MacColl will draw on over 30 years of experience in libraries and information services.

He was elected to the Board of RLUK in March 2013 and was elected as Vice-Chair the following year, serving as Chair from 2015-2017. He has a particular interest in scholarly publishing and communications, and the library role in support of the research process. He was elected as a Fellow of the Royal Society of Edinburgh in 2014.