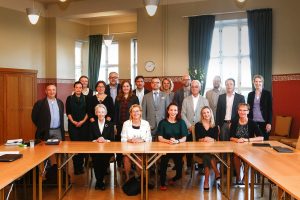 LIBER’s Executive Board and office staff at our 2016 Annual Conference in Helsinki (image by LIBER, CC BY).

Nominations have now closed. Details on who was nominated and the voting process can be found here.

This year, we are seeking appointments for two new members of the Executive Board.

In addition, current Executive Board Member Mr Andris Vilks, National Library of Latvia, Riga, Latvia, has completed his second term of office and will stand for re-appointment.

Appointments to the LIBER Executive Board are open to nominated candidates in all LIBER Libraries in the Institution and Organisation categories. Candidates may be proposed by the nominee’s home library or by another LIBER Library. The consent of the candidate should be obtained by the proposer before a nomination is submitted. Candidates from current LIBER Libraries can also nominate themselves, with the support of a proposer.

The LIBER Executive Board welcomes candidate nominations from libraries in countries in all parts of Europe, and from younger candidates.

If you would like to join LIBER’s Executive Board, please complete the Nomination Form and return it to LIBER’s Secretary-General by the close of business on Thursday 22 June 2017. Nominations should be addressed to: Dr Ann Matheson, Secretary-General, by email (a.matheson@tinyworld.co.uk).

LIBER has so far received the following nominations.

Candidate nominations, with nomination forms, are posted on the LIBER Intranet upon receipt.

Please note that a Proxy Voting Paper may be obtained from the LIBER representative at the LIBER Desk up to 17.00 on Wednesday 5 July 2017, upon receipt of a Proxy Voting Form showing a Participant’s intention to delegate its vote to a proxy.